2021-01-06
This sounds quite absurd and I admit so myself. Winterish coat in light color and made from cotton? My objective was a white or rather off-white coat in mid-calf length, simply because I like outfits sporting one, but I realized at the same time that it is an impossible color being worn on streets and trains all week round. So I knew it will be for occasional wear only and I shouldn’t worry too much over the practicality (of a white coat for god’s sake) and shouldn’t be investing too much money in it. 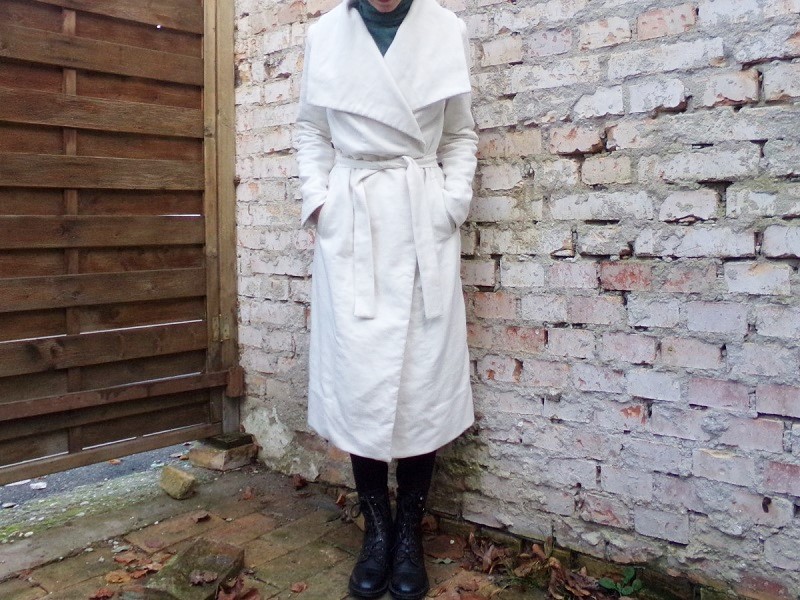 I ended up buying 2,1 m of this ivory cotton duvetyne, because I liked the idea more then polyester coating. The fabric is wonderfully soft and doesn’t look cheap in my opinion. I used this free pattern and adjusted the length. I believe I also took a few centimetres of the central front line because I thought that the front pieces were too wide and I didn’t want them overlapping just as much (and I was highly aware of my fabric amount - they needed 3 yards for the original design!).

It was convenient to use a pre-made pattern, but I ended up paying for not measuring and checking it properly. They included seam allowance in the pattern, yet omitted to mention that this doesn’t apply to the shoulder dart from some reason and the dart is not meant to be cut on the line like the rest of the thing, but with additional allowance instead! Of course I made this discovery only after cutting everything out and had to improvise, so I was actually happy I didn’t purchase wool for this purpose. I was very disappointed with the pattern!!

Doing some rudimentary basting by hand I discovered that the cotton wave is quite stiff and started to worry if my home sewing machine will be able to stitch through several layers of the stuff. I found a thicker needle hoping that it will better cope with the tough fabric and almost panicked when it didn’t and my machine refused to bind stitches. I changed back to universal size 90 needle and proceeded without any issues whatsoever. Sometimes it is better not to overthink it.

I played with the idea of adding a lining, but didn’t have any suitable fabric at hand and probably not even enough of the main fabric. I kept the original design and settled on hiding the seams with a bias binding. My fabric, unlike the lovely wool they used in the original project, has only one “pretty” side and I needed a solution to mask the fraying edges. In the end I made about 12 meters of bias tape from a gray light-weight cotton wave. I attached it solely by hand because I knew that I would mess up trying to do it by machine. The truth is that I do actually enjoy hand sewing, so no complaint there, only I realized that I should really get a thimble. 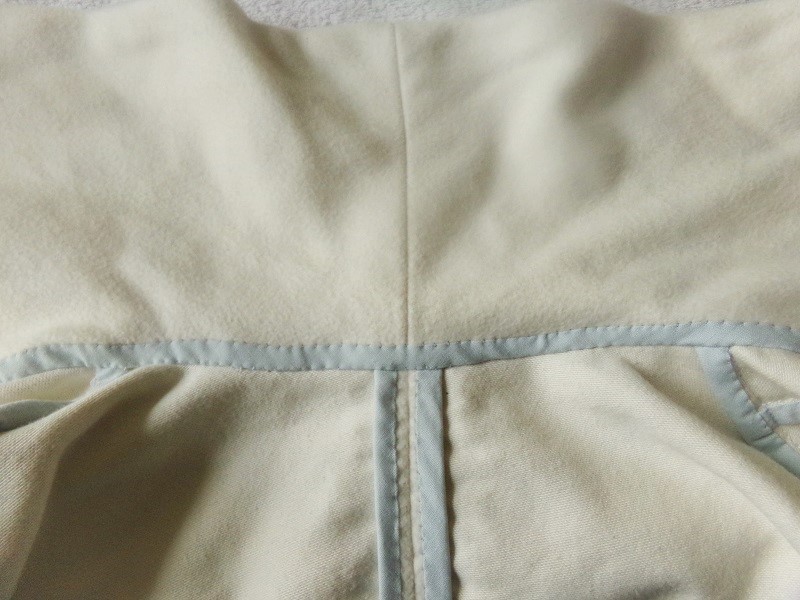 I went on and covered the dart seam too. I find that quite neat. 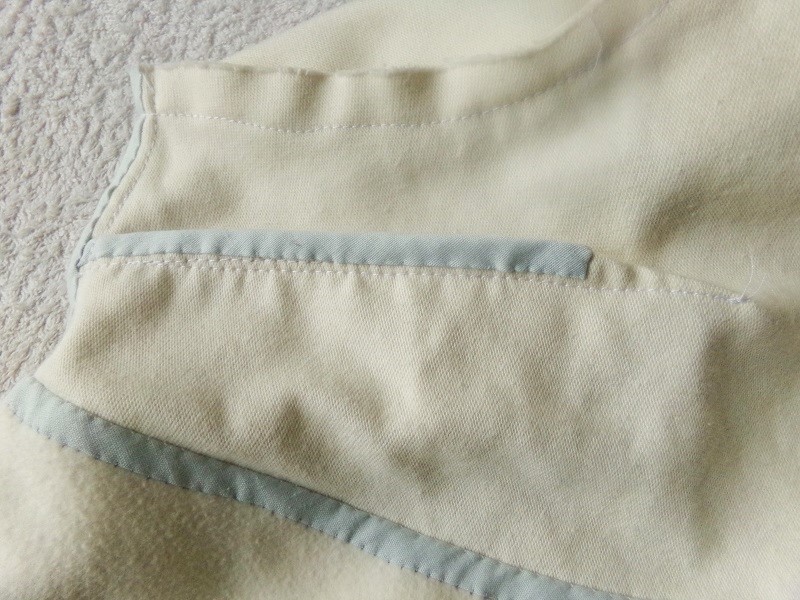 Unfortunately I used this ugly scrap of fabric for the pocket lining, no idea what I was thinking (probably that it doesn't matter on the inside). Too late to change that now. 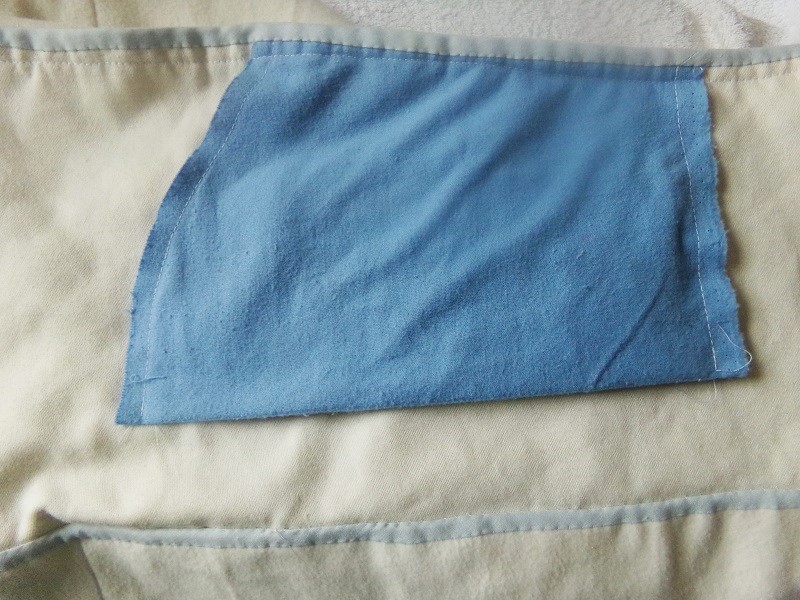 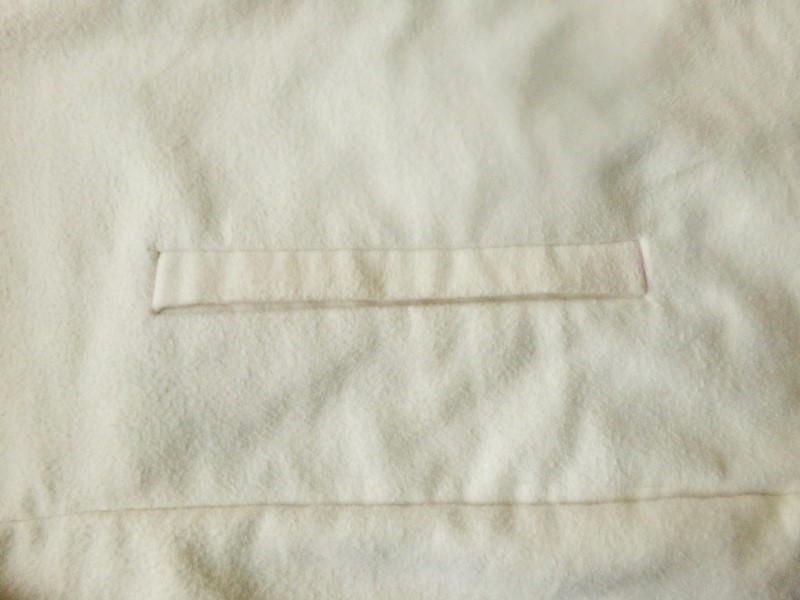 I was also debating with myself for a ridiculously long time if I should stitch the seam allowances down, creating decorative topstitching. I stitched and ripped a seam or two and in the end left the topstitching only on the back seam, mostly because it was too much bother to redo it at that point. The color of the thread is white and not exactly matching, but I am reconciled with that. 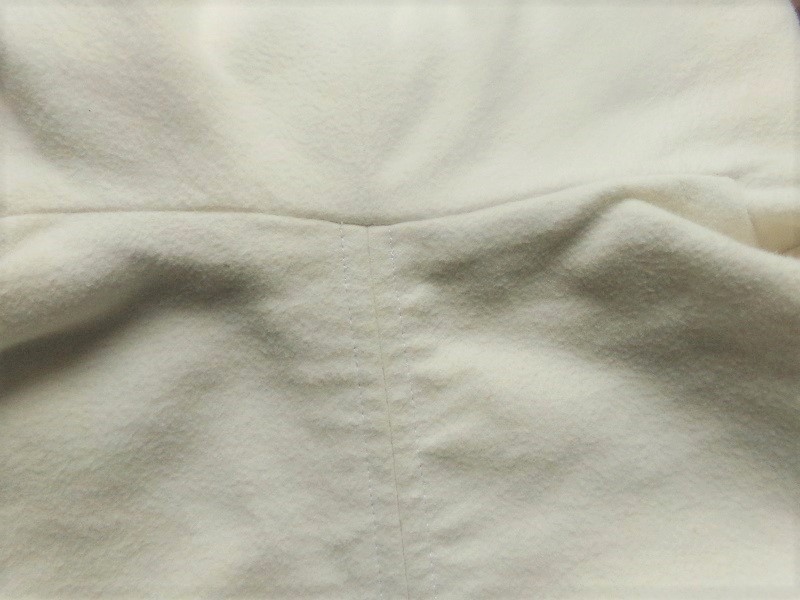 I also added a back slit, just to have more freedom while moving.

There are some minor issues with the coat, like the sleeves are too narrow and I can’t wear a thick sweater underneath. And the collar is drafted too small causing some creasing, as you can plainly see in the pictures. I guess I shouldn’t use random patterns before fixing them first. There is also the matter of impressed seams on the right side of the garment, which I suspect is caused by the thread used to attach the seam allowance, tugging the fabric inward. I’m not sure that I can do anything about it so I won’t consider it overly hideous. 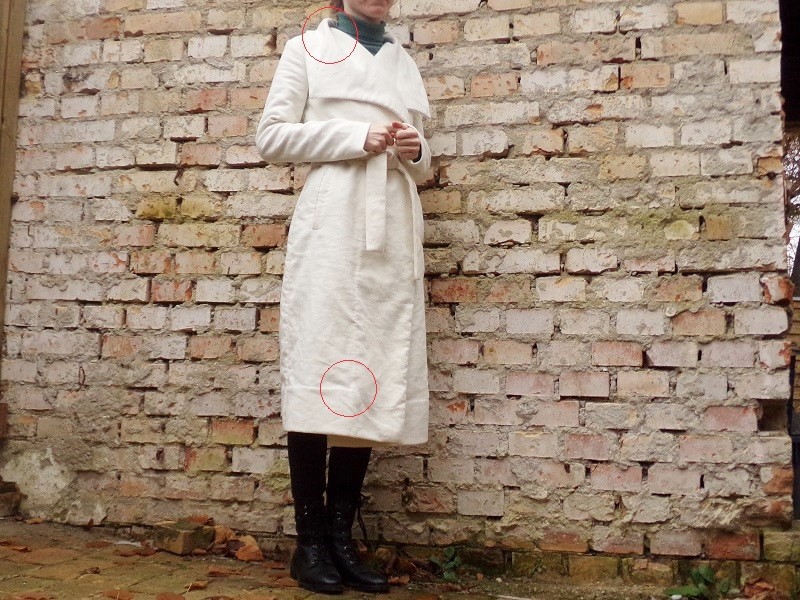 Still, I like the overall appearance of the finished coat well enough and expect to get some wear out of it. And in the end I was very happy with my fabric choice!