2021-02-18
It’s always a good idea to have a pair of nice, comfortable, slightly loose fitting black trousers in the wardrobe. I didn't, but then I acquired two pairs of random black trousers ready for altering. I was really looking forward to modifying the first pair, but became too enthusiastic during the seam-ripping and teared the fabric so inconveniently that I couldn’t use it for trousers anymore. Great job.

I didn’t like the second pair just as much because the fabric is not uniformly black. But the material is a bit stretchy and well, one should just take it as it comes. What more, it was really easy to alter the trousers, because there were no complications like pockets etc. This is how they look like now and below I'll explain the changes: 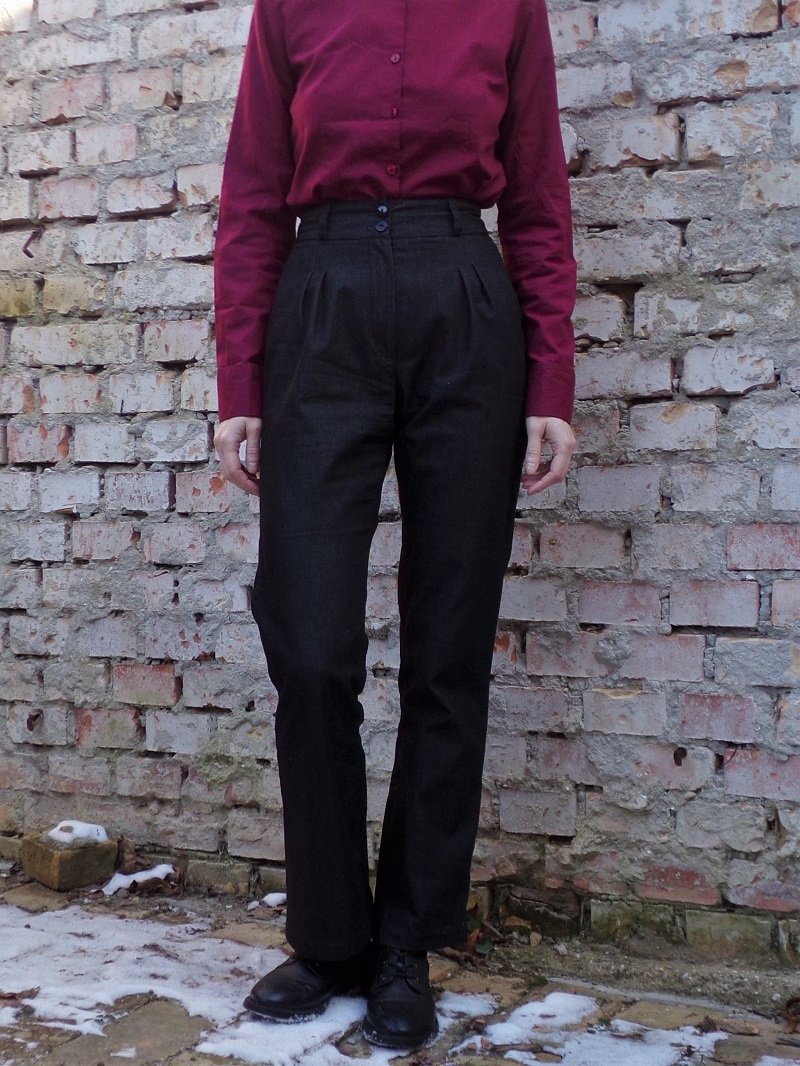 Firstly I removed the waistband to get to the back seam. I took away a couple of centimeters there and moved the crotch downwards because I wanted a higher waist. I adjusted the fit further with back darts. 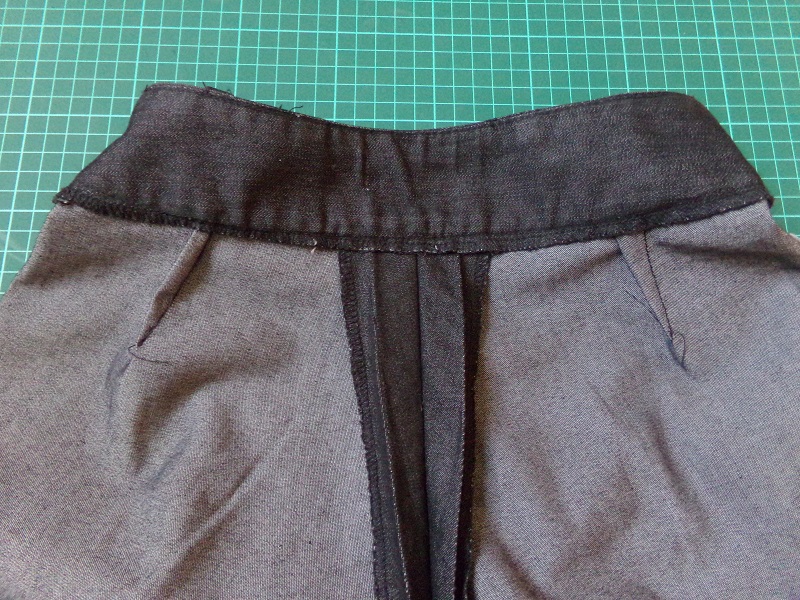 Rather then taking in the front at the side seams (meaning I would have to seam-rip the sides too) I just added two little plaits on both the front pieces and was done. 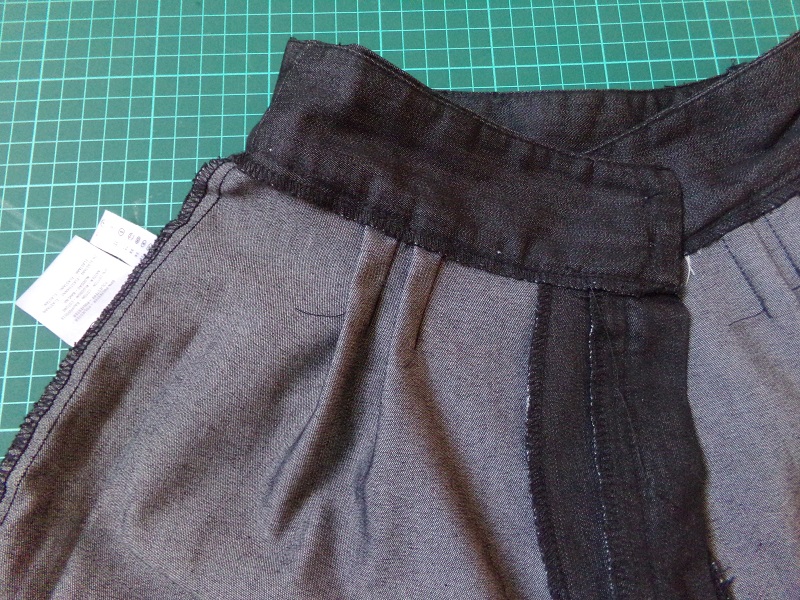 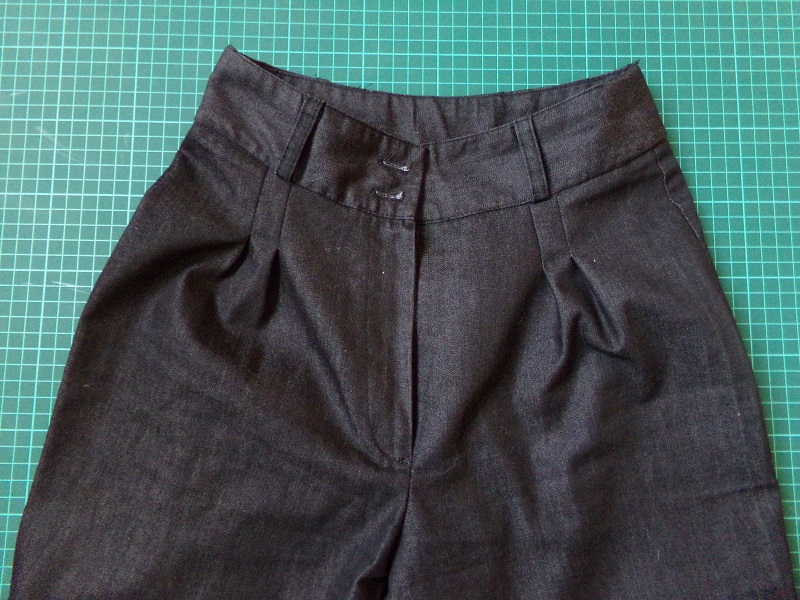 I adjusted the waistband by taking it in at the sides and reattached everything in place. It was really convenient, because aside of the waistband the only seam I had to open and alter was the crotch seam and the uppermost portion of the inseams.

This is the added side seam on the waistband: 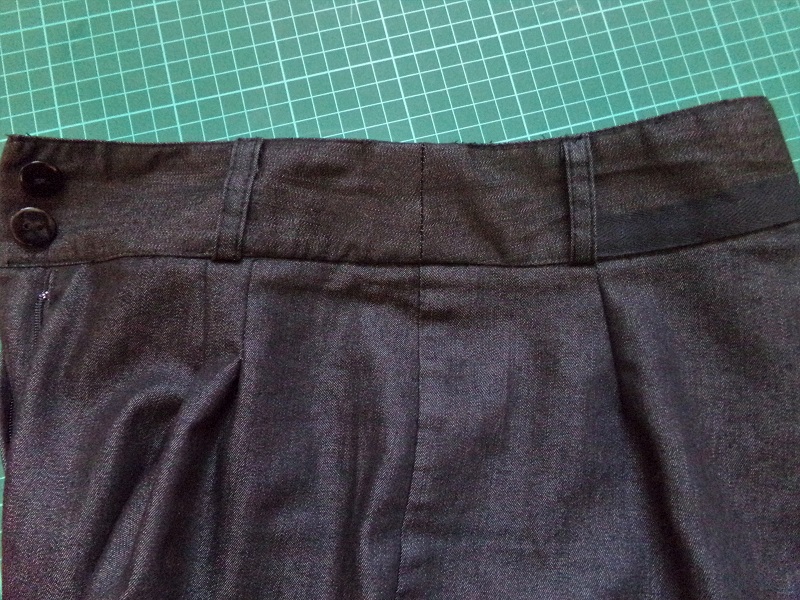 Then I narrowed the leg’s bottoms. There was a small spot where the fabric was damaged and I moved the seam past that mark, and either way I didn’t want the bottoms quite as flared. I didn’t even bother with serging the edges because the fabric almost doesn’t fray. I also re-hemmed the bottoms since the legs were clearly shortened and hemmed at home and someone did a really poor job of it. There are still visible marks where the seam pulled out the fabric’s threads. Maybe it will get better with washing, but I’m not too concerned, because I don’t expect people peering closely at my leg’s hems. 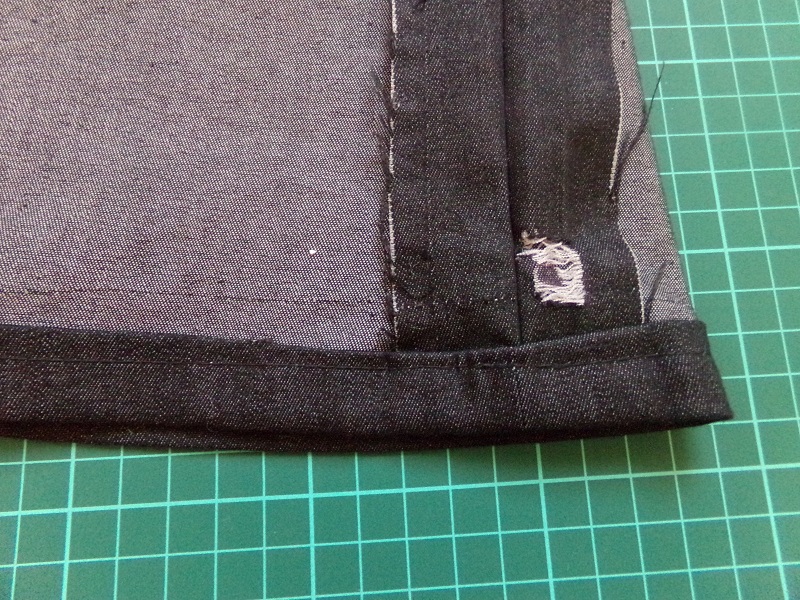 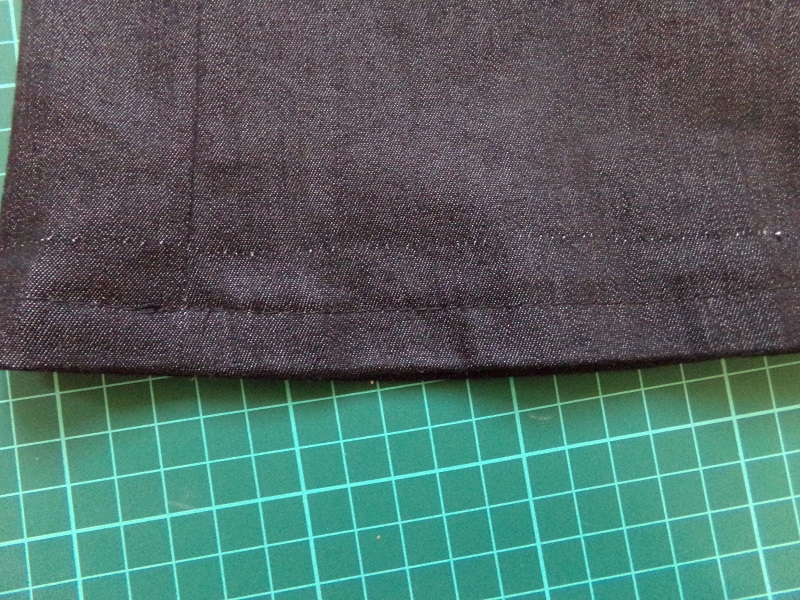 After all my efforts I noticed that there is another patch of worn-down fabric directly on the waistband!!! I tried to mend it the way one darns socks, but it didn’t look good and was still too visible. In the end I covered a portion of the waistband including the damaged spot with a black twill tape. It doesn’t make much sense to have a tape in that place of your trousers, but it’s inconspicuous enough and hides the blemish. 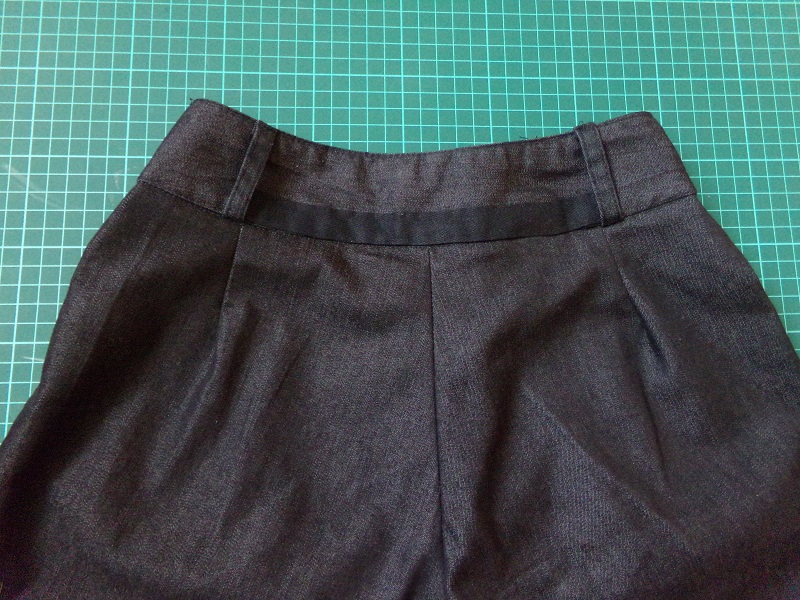 In the end I am quite satisfied. I think I will wear these trousers often enough because they are so versatile and comfortable. They serve well as everyday garb, but I can style them for a more formal setting as well. 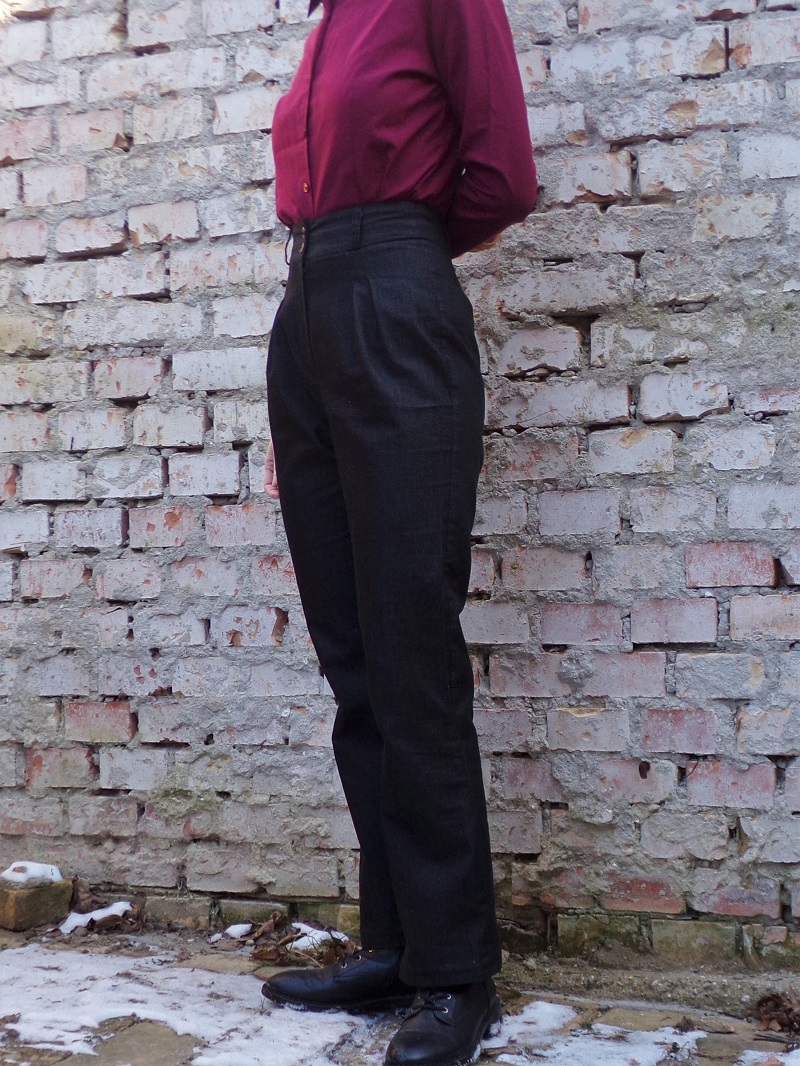 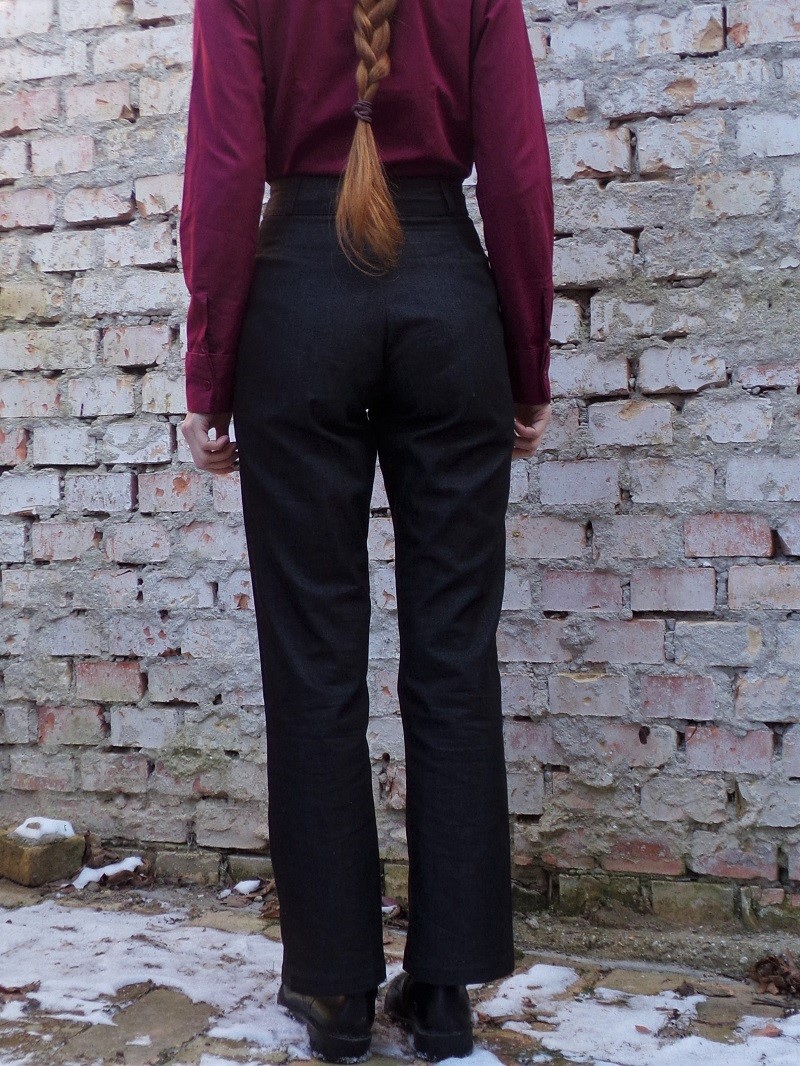 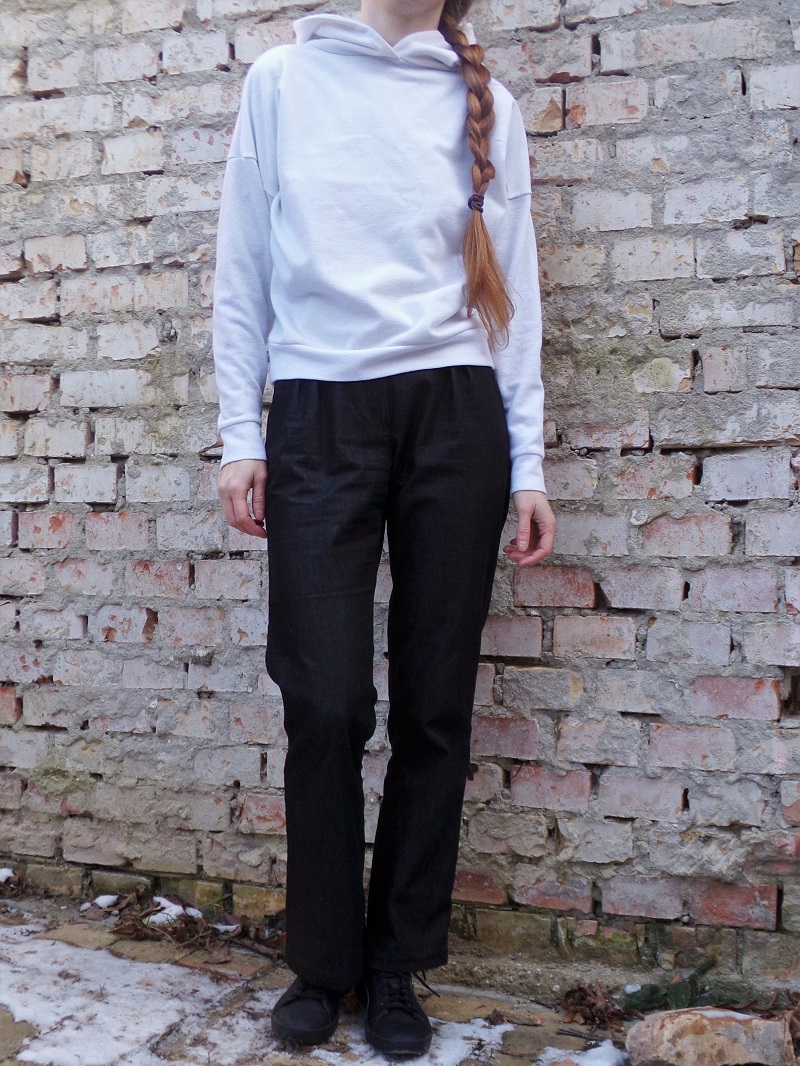